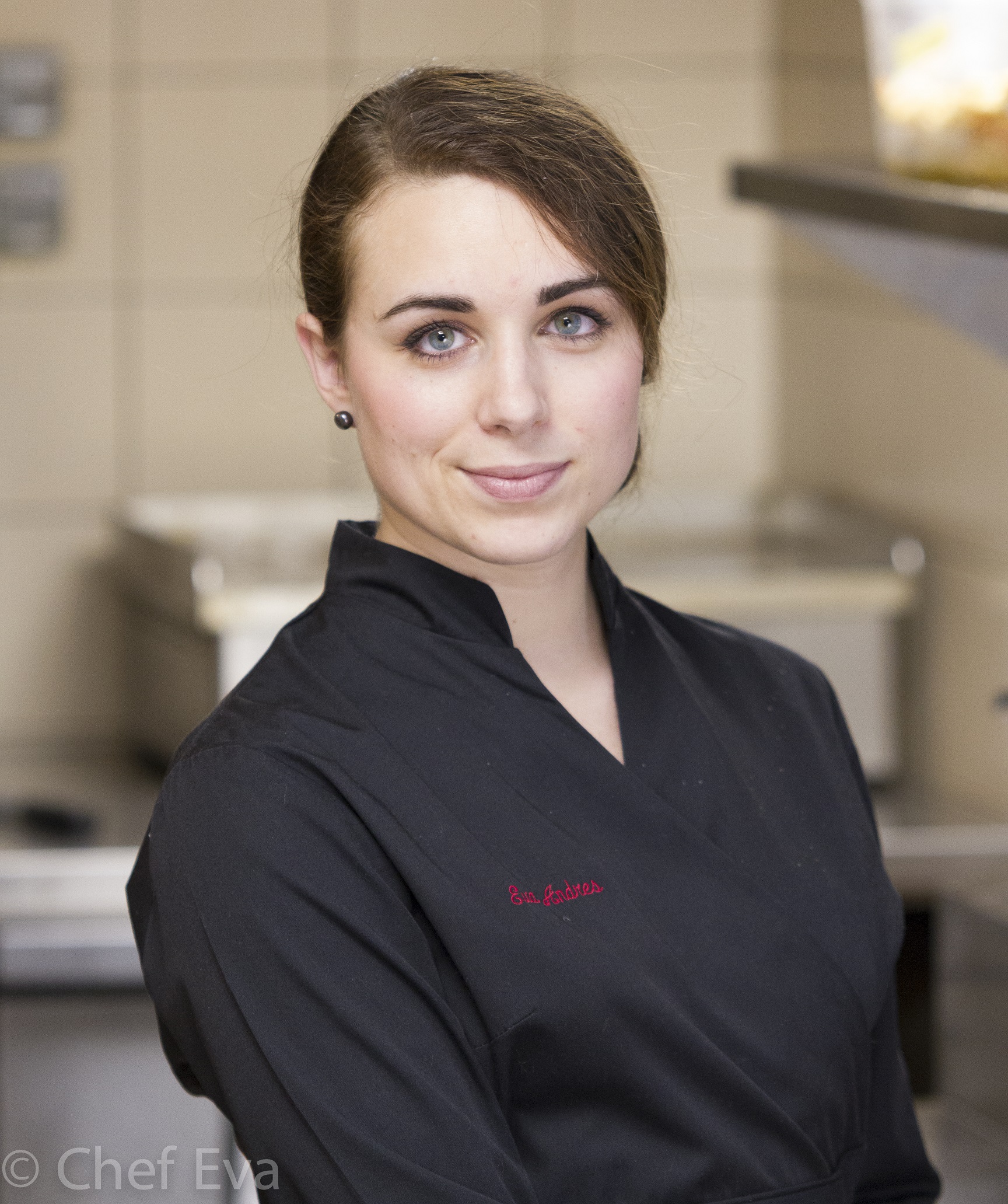 Chef Eva was born of a Spanish father and a French mother. She grew up in France and her love of cooking began at an early age. She could often be found sitting on the corner of a kitchen counter while her Baba (grandmother) cooked. When her family moved away from her grandparents, her brother and she took matters into their own their own hands and began to experiment in the kitchen. Eva continued her education by attending culinary school. After 4 years of school and an apprenticeship at The Plaza Athenee in Paris, she continued her culinary journey traveling and working on four of the seven continents. During her travels she spent 8 months bicycling France, working with Michelin star chefs, local producers, and savoring the opportunity to discover her country to the fullest. She happily cooked her life away, working 12 to 15 hour days for little pay, but a wealth of knowledge.

Eventually the long hours and hard work caught up to Eva.

In 2015, I had a stroke which induced a miscarriage. I couldn't speak and my body was exhausted. My soul was hurt by the loss and at what felt like a betrayal from my body. I was forced to return to France, where I spent eight months recuperating at my Grandma's. Baba  cooked for me, bathed me, and little by little nourished me back to health with her love. I took time to think about my life and what I wanted to do with it. Despite everything, I still wanted to cook, but not in the same way. Not for a boss. Not stuck in a kitchen. I wanted to work hand-in-hand with my customers, feed them the best produce picked from my garden or purchased from local farmers at the farmers market, teach them this loving tradition of happy cooking, and transmit through my food the warmth and tenderness I always felt in my grandma's kitchen. That's why I started my business as a personal chef.

(LEGACY -- DO NOT USE) My Challenges

As a French citizen, the main challenge for me was to learn how to manage my books and accounting matters the way it is done in the US as well as the legal forms of businesses. Adding to the challenge, I fell in the trap of spending too much money in advertising without seeing a return on investment.

My greatest success is having enough customers for my business to be sustainable, despite starting it a place where I knew nobody. I invested a lot in advertising at the start, but I realized that the most efficient ways are self-advertising and through word of mouth.

My next goal is to become the number one caterer in Asheville in the coming year.

My mentors know all the details of business ownership inherent to the US (which are totally foreign to me) in addition to knowing a great deal about Asheville. They have legal, cultural, common sense advice that I lack because I didn't grow up in this country and because I am fairly new to Asheville. Something else that is fantastic about SCORE? It is free. Which is an incredible asset when one is starting a business and needs to save every penny.

What's great about my mentor?

When I started my business last year, I had to relearn everything about business ownership...New country, new rules! I owe a lot to the SCORE mentors for their help and guidance. Now that I have joined the Women's Business Roundtable, I've found another wonderful net of support, knowledge and kindness.